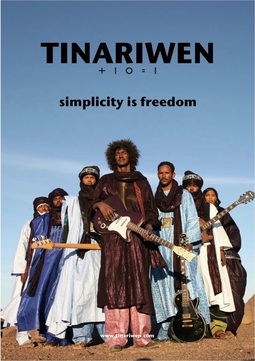 ONE NIGHT ONLY
The Arts Centre, Hamer hall
www.tinariwen.com


What a superb way to spend one’s Wednesday night. To be honest I was a little worried about the language barrier regarding lyrics but a few beats into the introductory number; I found myself in the same place as the musicians and looking around Hamer hall I believe I was not the only one enjoying the meditative sound of the desert warriors – Tinariwen. With their magnificent presence and calm demeanor the turban wrapped six piece ensemble looked at home on stage. I particularly found their stage craft to be brave. While they sing in native tongue – the warriors felt no obligation to explain/translate the meaning of each song to the jubilant crowd of Melbourne.
To me that was art in its purest. The artists trusted the audience to take something from each song and interpret [it] in their own way. This was achieved by allowing the composition to carve itself through rich melodies and collision of guitars, drums and enigmatic voices. Since they swapped rifles for guitars 20 odd years ago; their determination remains to be one of a story teller – sharing a tale of struggle, love, and freedom. A universal one [tale] that is exuded in their melancholic yet positive sounds. With each song, a new layer of their story unfolded and the crowd lived in a moment with them. Through the mental tangibility of each texture the audience was transported to each one’s special place while moving to the same beat. One did not need to be French, African or anything special to appreciate the sheer beauty that rocked Hamer hall.And it was with a standing ovation that Tinariwen left the Melbournians beseeching for more. Joining their elite list of fans will be masses that found pleasure in their magnificent display.

Visit them on www.tinariwen.com  and they are also stocked at Borders, start your collection today.