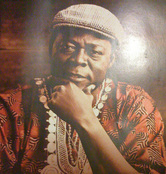 
... To afford a smile, is a feeling next to none, to be able to share a genuine smile is humility without debt.
To capture a true moment in a smile is to share the humbleness that completes a true artist...
At his first solo show; photographer Damian William Vincenzi brought an exceptional mood to Steps gallery on Lygon Street. Through his work, Vincenzi manages to successfully collide his love of music, people and photography without compromising his personality and technique.
Vincenzi's immaculate technique allows him to project his subject without clattering the composition with background details. I particular enjoyed the very first black and white portrait which was part of Burundian Drum and Dance group 3; a side of a face clad in white head wrap and diamond stud. I found this piece quite striking in its simple and clean form. While the displayed work appeared busy – on a closer inspection they complement the vibrant movement that is created by the subject in their performances. The entire layout is thus suited for what his documentary portraiture conveys. Other works on show included images of Diafrix, a live act that incorporates African roots, hip hop and storytelling in their stage offering. These works and others that were on display project an honest feeling that is shared wherever there’s music and people.

'Music is family' is a title coined by Eshak Awi, a highly regarded soulful musician who appears on the exhibition catalogue (and the image above). He also serenaded the crowd with his beautiful sounds on the opening night. When I asked Vincenzi why this title? This is what he said “One of the artists represented in the exhibition ‘Eshak Awi’ came up with the quote and we decided to use it as the title for the exhibition. Eshak explained to me that music is the one universal language we can all speak. He also said that this is a way of life in Sudan and throughout most of Africa. I think this sends a strong message to all communities and promotes social unity amongst our diverse city”.

In this show; the artist employed photography to bring to life the simple joyous moments which are not necessarily conveyed through mass media when refugee communities are in question. In a conversation with Vincenzi; he mentioned that the true moment of happiness with regards to this show was being able to cross path with the people he photographed, and through the special connection that developed while working with them - he will eternally embrace them as friends.

This exhibition was part of Emerge festival, an event in Multicultural Arts Victoria calendar which champions the diverse cultures of emerging refugee artists and communities in Victoria.  www.multiculturalarts.com.au