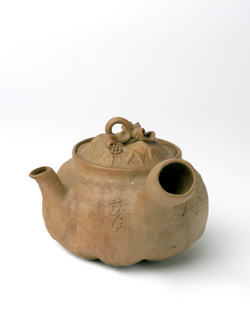 Born in 1791 into the world of poverty and having survived the hardships of womanhood, Rengetsu’s immaculate pieces tell a story of self contentment. This I believe is a story not only women can relate to but anyone who is able to take a moment in time to reflect on their travelled path and the one ahead. She held Todo as natural family name; became a Buddhist nun and adopted the name Rengetsu, translated “Lotus Moon.”

Rengetsu married between the tender ages of 7 to 16 during her time at Kameoka castle where she earned a living as a Lady in waiting. Her husband passed on in 1823. She also lost all her children to illness. Following this turning point in her life she found solace in nunnery. Subsequent to relocating from one temple to another, Rengetsu finally settled at the Jinko-in where she lived her days to the last. She died peacefully at the age of eighty-five in the tea room.
This was a well accomplished woman in her art form. Not only did she learn the Classical Japanese poetry of Waka, but her achievements included dance, pottery and calligraphy. Having being brought up in a Samurai family, Rengetsu had also acquired skills in Martial Art. This relationship is evident in the manner in which her collaborative works (gassaku) compliment each artist’s individual style. With her vast acquired expertise Rengetsu was able to achieve flawless depiction through the treatment of line. In the hanging scroll  In this world,in a gassaku with Tomioka Tessai, her delicate calligraphy floats in a complimentary fashion to the paper and imagery that completes the composition, this indicates that she was a well spirited person of graceful gestures. Although loose in form, her technique captured the assurance, the strength and decisiveness of the artist. The lightness of the pieces-almost fading into its own surface draws the viewer closer to the work creating a personal viewpoint which digs deep into the persona and thus finding that point of relation to the observer.

Rengetsu engaged in a lot of gassaku. These are collaborations to observe friendship and special occasions. Her main connections were with such people as Tessai Tomioka, Wada Gozam and Kuroda Koryo who later gained the title of Rengetsu II. Rengetsu did what it took to help put her friends’ work on the map, e.g. she would inscribe her poetry in their works or even allow them to sign her name on their works. This demonstrated that her comfort did not lie in material items such as fame and fortune. Kuroda continued to sign as Rengetsu after her passing.

When I walked into the exhibition I was immediately drawn into what laid before me. I couldn’t wait to get closer to the pieces. For me, presentation of art (visual, performance, word and so on) has the power to make or break the intended story. I must say the RIMT Gallery captured the essence of the show and as one slowly moves from one piece to the other, one gets transported through an amazing journey of tranquility and places full of peace. From the traces of her hands on the pottery to the playful yet strong significance of her poetry, the entire body of work was such a marvel.

In Japanese culture tea and sake ceremonies are great social occasions for celebration of friendships, weddings, business partnerships, etc. By choosing to engage in collaborations (gassaku) with her friends, the results convey the enjoyment of the making process which gives a sense of shared experiences and sheer social bliss which the end user can definitely appreciate while employing her objects during tea/sake ceremony. The textural finish visible in works like This gentleman, sencha tea set, demonstrates the depth of personal engagement with her work as well as the lengthy quiet moments she shared with each pieces.
This show was in great contrast to the fact that the gallery is situated smack amidst Melbourne CBD on Swanston Street with a tram stop just outside the entrance.
Black Rope White Mist truly succeeds in diverting the viewer’s attention and I’m happy to report that I was taken on a voyage from the moment I laid eyes on the first gassaku. I commend the curators and the RMIT gallery staff for being able to showcase this remarkable piece of Japanese history. I had no idea what would be ahead but I can assure you Rengetsu’s poetry stroke a chord in me and I believe I experienced some degree of healing from within.